Infrared light lies between the visible and microwave portions of the electromagnetic spectrum. Infrared light has a range of wavelengths, just like visible light has wavelengths that range from red light to violet. “Near infrared” light is closest in wavelength to visible light and “far infrared” is closer to the microwave region of the electromagnetic spectrum. The longer, far infrared wavelengths are about the size of a pin head and the shorter, near infrared ones are the size of cells, or are microscopic.

Far infrared waves are thermal. In other words, we experience this type of infrared radiation every day in the form of heat! The heat that we feel from sunlight, a fire, a radiator or a warm sidewalk is infrared. The temperature-sensitive nerve endings in our skin can detect the difference between inside body temperature and outside skin temperature. Infrared light is even used to heat food sometimes – special lamps that emit thermal infrared waves are often used in fast food restaurants!

Shorter, near infrared waves are not hot at all – in fact you cannot even feel them. These shorter wavelengths are the ones used by your TV’s remote control.

How Can We See Using the Infrared?

Humans, at normal body temperature, radiate most strongly in the infrared at a wavelength of about 10 microns. (A micron is the term commonly used in astronomy for a micrometer or one millionth of a meter.) This image ( which is courtesy of the Infrared Processing and Analysis Center at CalTech), shows a man holding up a lighted match! Which parts of this image do you think have the warmest temperature? How does the temperature of this man’s glasses compare to the temperature of his hand?

To make infrared pictures like the one above, we can use special cameras and film that detect differences in temperature, and then assign different brightnesses or false colors to them. This provides a picture that our eyes can interpret. The image at the left (courtesy of SE-IR Corporation, Goleta, CA) shows a cat in the infrared. The orange areas are the warmest and the white-blue areas are the coldest. This image gives us a different view of a familiar animal as well as information that we could not get from a visible light picture.

Humans may not be able to see infrared light, but did you know that snakes in the pit viper family, like rattlesnakes, have sensory “pits”, which are used to image infrared light? This allows the snake to detect warm blooded animals, even in dark burrows! Snakes with 2 sensory pits are even thought to have some depth perception in the infrared! (Thanks to NASA’s Infrared Processing and Analysis Center for help with the text in this section.)

Many things besides people and animals emit infrared light – the Earth, the Sun, and far away things like stars and galaxies do also! For a view from Earth orbit, whether we are looking out into space or down at Earth, we can use instruments on board satellites.

Other satellites, like the Infrared Astronomy Satellite (IRAS) look up into space and measure the infrared light coming from things like large clouds of dust and gas, stars, and galaxies!Satellites like GOES 6 and Landsat 7 look at the Earth. Special sensors, like those aboard the Landsat 7 satellite, record data about the amount of infrared light reflected or emitted from the Earth’s surface.

What Does the Infrared Show Us? 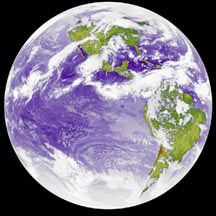 This is an infrared image of the Earth taken by the GOES 6 satellite in 1986. A scientist used temperatures to determine which parts of the image were from clouds and which were land and sea. Based on these temperature differences, he colored each separately using 256 colors, giving the image a realistic appearance.Why use the infrared to image the Earth? While it is easier to distinguish clouds from land in the visible range, there is more detail in the clouds in the infrared. This is great for studying cloud structure. For instance, note that darker clouds are warmer, while lighter clouds are cooler. Southeast of the Galapagos, just west of the coast of South America, there is a place where you can distinctly see multiple layers of clouds, with the warmer clouds at lower altitudes, closer to the ocean that’s warming them.

Infrared film ‘sees’ the object because the Sun (or some other light source) shines infrared light on it and it is reflected or absorbed by the object. You could say that this reflecting or absorbing of infrared helps to determine the object’s ‘color’ – its color being a combination of red, green, blue, and infrared!

This second image was taken with special film that can detect invisible infrared waves. This is a false-color image, just like the one of the cat. False-color infrared images of the Earth frequently use a color scheme like the one shown here, where infrared light is mapped to the visible color of red. This means that everything in this image that appears red is giving off or reflecting infrared light. This makes vegetation like grass and trees appear to be red. The visible light waves drawn on this picture are green, and the infrared ones are darker red.

This is an image of Phoenix, Arizona showing the near infrared data collected by the Landsat 5 satellite. The light areas are areas with high reflectance of near infrared waves. The dark areas show little reflectance. What do you think the black grid lines in the lower right of this image represent?

This image shows the infrared data (appearing as red) composited with visible light data at the blue and green wavelengths. If near infrared is reflected off of healthy vegetation, what do you think the red square shaped areas are in the lower left of the image?

Instruments on board satellites can also take pictures of things in space. The image below of the center region of our galaxy was taken by IRAS. The hazy, horizontal S-shaped feature that crosses the image is faint heat emitted by dust in the plane of the Solar System.